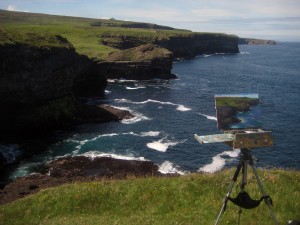 My residency at the Ballinglen Arts Foundation in Ireland has come to an end.

I was lucky to be in Ireland for a very temperate summer, and was outside nearly every day painting, exploring, or both. With daylight lasting from 4:30am until 11:00pm, there was plenty of time to work and enjoy being in such an amazing place.

I had planned on posting paintings to the site while in Ballycastle, but decided I’d rather be wandering around Ireland than staring into a computer screen.

I’ll put some work up soon.

(I finally got to see Caravaggio’s The Taking of Christ, which was in Rome when I arrived in Dublin. It is now back at the National Gallery. It was great to see it in person, especially after basing one of the Lebowski paintings on it.)

2 thoughts on “Neither here nor there…”