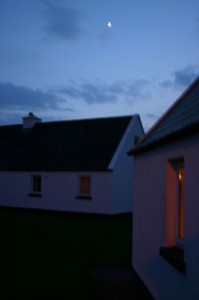 The updates have been slow lately, as it’s been an extremely busy couple of months. I was a visiting artist at the Pennsylvania Academy of Art in Philadelphia in March, and spent early April preparing for a 6 week artist residency in Ballycastle, Ireland with the Ballinglen Arts Foundation.

After worries over airport closures due to volcanic ash, and the long trek from California, I made it to Ireland and finally to County Mayo. It’s such a lush and beautiful country. The colors are rich and deep, and full of atmosphere and drama so different from the stark, sharper light of California. The skies are constantly changing, revealing subtle color dynamics as whole portions of the landscape drift in and out of view and in and out of focus.

I arrived in Ballycastle to a great little cottage just up the road from the studios, and did a bit of drawing, but really just took a few days to explore and soak up the environment, the light and the color before getting out in the landcape with my paints.

It’s only about a 2.5 mile walk to the Atlantic ocean from the studios, past pastures and a graveyard down to empty beaches and up to the great sea cliffs at Downpatrick Head.

I’ll be posting paintings and drawings here over the next couple of months, but until then I’ve posted a few random photos on my Flickr site: http://www.flickr.com/photos/25783201@N05/ 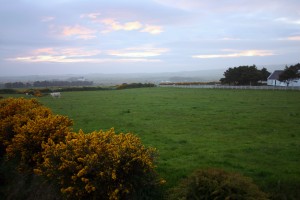 The Lebowski paintings are coming along, with one painting painfully close to being finished before I left for Ireland, but it still needs a bit more work when I return later in the summer.